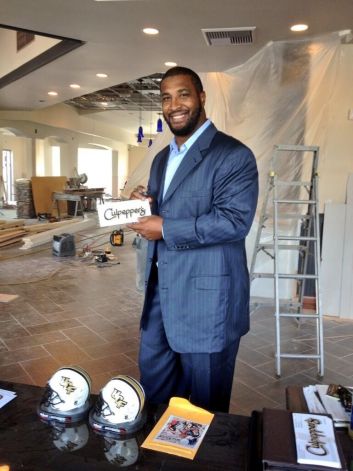 Former UCF star quarterback Daunte Culpepper has long been one of the school’s most prominent alums, but never its most visible.

With a new restaurant bearing his name set to open near campus, however, the former first-team all-American vows that is going to change. On Friday afternoon during an interview at the nearly-completed Culpepper’s restaurant on University Boulevard, Culpepper said he intends to be a bigger part of the Knights’ community moving forward.

UCF has come a long way since Culpepper’s playing days. A sprawling campus houses the second-largest student body in the country; an on-campus stadium is the crown jewel of the football program. This season, the Knights will move from Conference USA to the American Athletic Conference. While the leap is not as significant as the move up to Division I that Culpepper shepherded from 1995-98, it is one that can be just as meaningful to the growth of the program.

“I want to be a part of that,” said Culpepper, a three-time NFL Pro Bowl selection and member of the UCF Hall of Fame. “I think coming here knowing what it was as a freshman, staying in [dorms] just 200 yards from here, and seeing where it is now, it just makes me feel good to have an opportunity to be a part of this community.”

Culpepper is lending his name to the restaurant in a partnership with another former UCF quarterback, Kyle Israel, and Tony Comas, a UCF alum and radio personality, among others. The restaurant is located on University Boulevard just one mile from campus and is set to open on Aug. 28.

While Culpepper is the most widely-known product of the Knights football program, he has not often been accessible. His last appearance at UCF came in 2010, during halftime of the homecoming game. Culpepper said that since his pro football playing days ended in 2011, he has been focused on spending more time with his family.

The Ocala native said he has kept close tabs on the team, quietly attending games last season, and that he will be present again at Bright House Networks Stadium this fall.

Culpepper’s No. 8 jersey was honored twice by UCF, including once during what former coach Mike Kruczek called a jersey retirement ceremony and had been out of rotation since the quarterback left in 1998. The past two seasons, however, running back Storm Johnson has been permitted to wear the number. The decision did not bother him, Culpepper said.

“If he wears my number, if anyone wears my number, I hope they realize the last guy that wore that here he put his nose to the ground and busted his butt every day,” Culpepper said. “If they have that thinking, it’s cool with me. Storm, in my opinion, is a great player. I’m not upset about anything, I just want him to understand, for me personally, what that number means to me.”