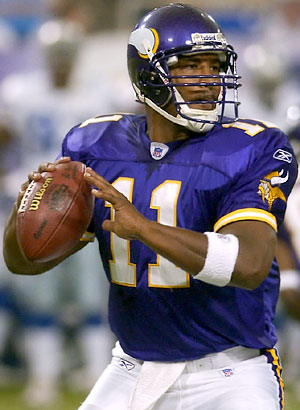 Daunte Culpepper was born January 28, 1977 and is a former American football quarterback. He last played for the Sacramento Mountain Lions of the United Football League (UFL). Prior to joining the UFL, Culpepper enjoyed a successful National Football League (NFL) career after being drafted 11th overall in the 1999 NFL Draft by the Minnesota Vikings. He played college football at the University of Central Florida.

He struggled to get into college, because of low SAT scores. Marquee football schools, such as the University of Miami and University of Florida, backed off from recruiting him when it was assumed he would not qualify. The University of Central Florida, however, offered to tutor him and help him achieve the necessary scores, and he was able to qualify. Although the big college programs returned to recruit him, as a show of loyalty, Culpepper enrolled at UCF.

Although he had a love for baseball, Culpepper committed to play football at UCF as a quarterback. He rewrote virtually all of the school’s quarterback records, approximately 30 in all, many held by Darin Slack since 1987. He also set an NCAA record for single-season completion percentage at 73.6%, breaking a 15-year-old mark set by Steve Young (71.3%). This record would stand until Colt McCoy (Texas) finished the 2008 season with a completion percentage of 77.6%. Culpepper accomplished a feat equaled by only two others in NCAA history when he topped the 10,000 yard passing mark and the 1,000 yard rushing mark in his career. He finished his career sixth on the NCAA’s all-time total offense list for all divisions with 12,459 yards and was responsible for 108 career touchdowns (84 passing).

After his junior season, he was being lured out of the collegiate ranks to enter the draft and join the NFL, but instead returned to UCF to graduate and play his senior year. UCF posted a 9–2 record, losing only to Purdue and Auburn.

Culpepper was drafted eleventh overall in the first round of the 1999 NFL Draft by the Minnesota Vikings; he was the fourth quarterback chosen, after Tim Couch (1st overall), Donovan McNabb (2nd) and Akili Smith (3rd). In his first year Culpepper saw limited playing time and did not throw a pass.

In 2000 he was named Minnesota’s starting quarterback. He led the Vikings to victory in the first seven games of the season, and helped them finish 11–5 and advance to the NFC Championship game, where they were defeated by the New York Giants 41–0. During the season, Culpepper passed for 3,937 yards, 33 touchdowns and 16 interceptions. He also rushed for 470 yards and seven touchdowns. One of Culpepper’s most notable moments was against the Buffalo Bills when he threw a pass across his body and the field to Randy Moss for a 39-yard touchdown pass, although the pass was at least 60 net yards. At the end of the year he was selected to his first Pro Bowl. Randy Moss, wide receiver for the Vikings, said that Culpepper was one of the most talented quarterbacks he has ever seen following the 2000 season.

Culpepper enjoyed his best statistical season as a professional in 2004 and, though they were only 8–8, the Vikings reached the playoffs for the second time with Culpepper. Passing for a league-leading 4,717 yards, a Viking-record 39 touchdowns, and only 11 interceptions, Culpepper was named to his third career Pro Bowl. Culpepper also broke Dan Marino’s NFL record for combined passing and rushing yards, amassing 5,123 total yards. His 2,323 rushing yards from 2000–2004 also made him only the fourth quarterback in NFL history to run for more than 2,300 yards in a five-season period. (Michael Vick had 3,570 from 2002–2006; Randall Cunningham had 3,232 from 1986–1990; and Steve McNair had 2,387 from 1997–2001). Culpepper’s career rushing average of 26.1 yards per game is fourth-best among quarterbacks in NFL history. Only Vick (47.3 yds/g), Cunningham (30.6 yds/g), and Bobby Douglass (29.8 yds/g) have averaged more rushing yards per game during their QB careers. After the 2004 season, Culpepper said the game had “slowed down” for him, saying “I feel like a Jedi Knight.

A three-time Pro Bowl selection with the Vikings, Culpepper had a historic 2004 season in which he set a single-season record, since broken, for the most total yardage produced by a quarterback in NFL history (5,123). However, Culpepper suffered a serious knee injury the following season that ended his Vikings career. Since then, he played sparingly in the NFL for the Miami Dolphins, Oakland Raiders, and Detroit Lions. Culpepper ranks 14th all-time in NFL career passer rating (87.8) and holds the seventh best single-season passer rating from his 2004 season (110.9).

Outside of football, Culpepper has worked with the African American Adoption Agency. He hosts an annual Daunte Culpepper AAAA Celebrity Golf Tournament fundraiser, and has also served as a keynote speaker at the United Way Reason To Be Thankful celebration.

Culpepper appeared in an episode of George Lopez, along with Donovan McNabb. In the episode Culpepper is trying to recruit Jason McNamara, to play for Central Florida competing against McNabb who wants Jason to go to Syracuse.

Culpepper also appeared in the movie 50 First Dates in the huddle and throwing a touchdown pass to Jim Kleinsasser when Sean Astin and Drew Barrymore were watching a football game.

Culpepper was a guest star at the 2013 Super Bash event hosted by NFL UK in London.